In Defense of Chick Flicks

Away from home, in the early days of March this year, students were scribbling lists of pros and cons to decide what they should do. Their minds coming together in a chorus of answers such as “I should go home” and “I should stay where I am”. There was chaos and uncertainty in the minds of students in foreign countries even before they had to face the challenge of living through a lockdown for the first time in their lives. There was ration and emotion, fear and calm, frustration and clarity.

I myself went through days of thinking and re-thinking about what the best choice would be. And I know I was not the only one. Yet this important decision, which most of us had to make, has not been talked about a lot, even if this choice had impacted the upcoming months of their life.

Now that some time has passed, it might be beneficial to look back and to understand what we, as a student collective, went through. To understand what thinking patterns we had in common and to become aware of them. Therefore, this blogpost will present you with a collection of testimonials from 6 students of different nationalities, who back in March had a common dilemma – going home or staying in the country of their studies. What was it that made some stay where they were, while others returned home? 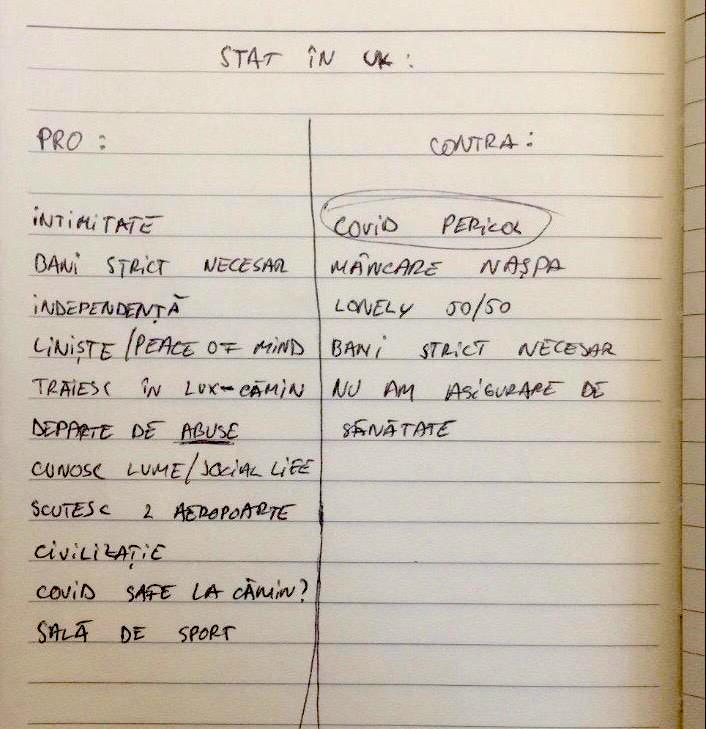 When asking students, I received a surprising volume of answers that built up to a picture of freedom, uncertainty, fear and love. Some enjoyed their freedom in Rotterdam too much to give it up so easily. For instance, Catherine loves how independent and free she feels in Rotterdam and Hong mentioned how her life in Rotterdam offers her a certain degree of freedom that she wouldn’t have back home. A student from the UK chose not to return to Romania, since her current life in the UK is so much better than what she had back home. V. is satisfied with his life here, and he loves everything about Rotterdam. He stayed thinking that the lockdown would not last as long as it did.

P. made a list of pros and cons and ended up deciding to go home to her family, even if she felt like her life was now in Rotterdam. Having two homes is part of studying abroad, and not being able to see your family for a long time is something that most of us have to cope with. 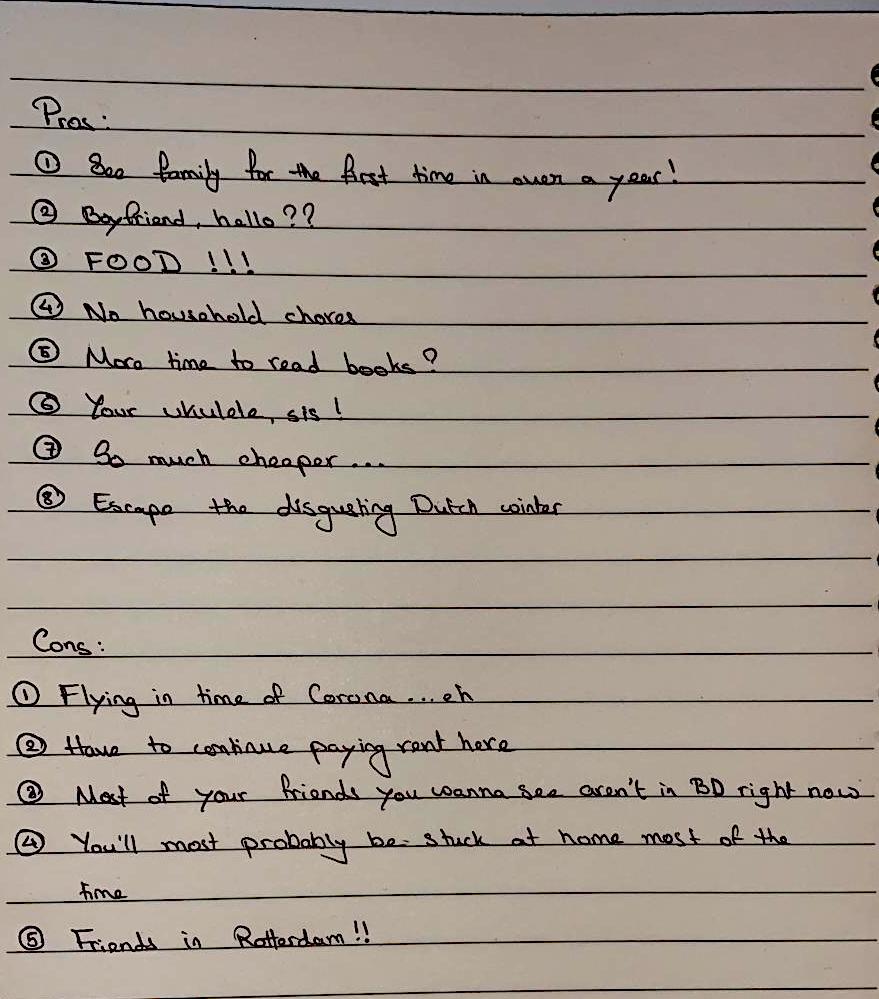 Fear seems to be the leitmotiv of students’ experiences. Matteo feared loneliness, after most of his friends went home. Catherine’s reasoning was that she should not go back home as long as she still had someone in Rotterdam that she could see. Even if a lot of her friends left, she chose to stay as long as one other friend was still staying. Sanne flew to her boyfriend in England, where she would spend the lockdown, driven by the fear of not seeing him for a long time. Hong felt fearful and uneasy when trying to decide what to do. For Amanda, “going home meant admitting the situation was (and still is) bad and scary”. She decided to leave the Netherlands to be with her parents. Alexandra left as well, after she and her girlfriend put their thoughts in order through a small list of pros and cons. 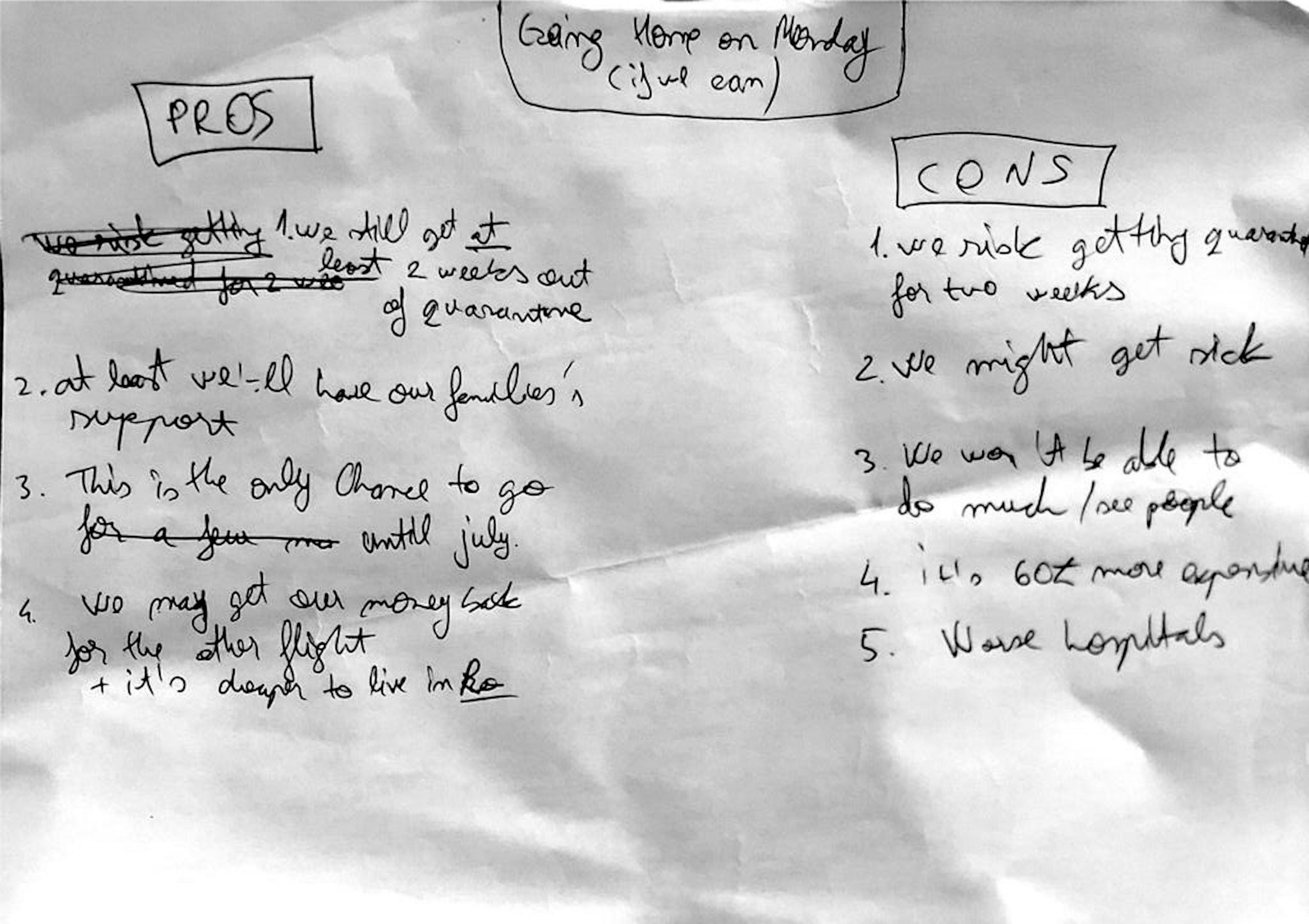 After all, no matter what we decided, it’s important to care for each other and to know that everybody struggled. Reach out to people, because almost always there will be somebody who is going through similar experiences as you. Sharing experiences with each other and talking about what we are going through is part of growing together. This is why this text is important for me, and I hope you resonate with it too.